2012 has been a notable year in terms of worldwide conflicts; we’ve seen the Arab Spring, the ongoing situations in Syria, Somalia, Iraq and Afghanistan and numerous other volatile and violent conflicts across the globe.

As a result, the demand for international press and media has been phenomenal, as the rest of the world grows ever more anxious for up-to-date news from these volatile regions. Journalists and film crews are, both on a freelance basis and as part of a larger news network, increasingly being sent to some of the most hostile regions on earth on a regular and sometimes long-term basis.

These situations beg an obvious and pertinent question; just how safe are foreign journalists in war-torn and hostile regions? How many members of the free press and media have been lost while covering international conflicts?

The following infographic looks at media deaths around the world in 2012, including how many have passed, where they died and how they died. So without further ado, here’s our Media Deaths 2012 infographic: 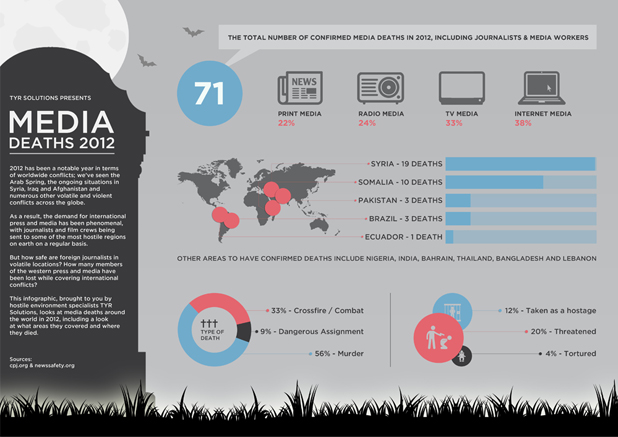 As a specialists in hostile environment training, it’s a concerning trend that so many press and media personnel have lost their lives this year, particularly when we know that many of those deaths could have been prevented with proper training and risk assessment. If you’re planning on visiting a potentially dangerous region in the near future, get in touch with us via the contact form to see how we can help ensure you’re properly prepared.